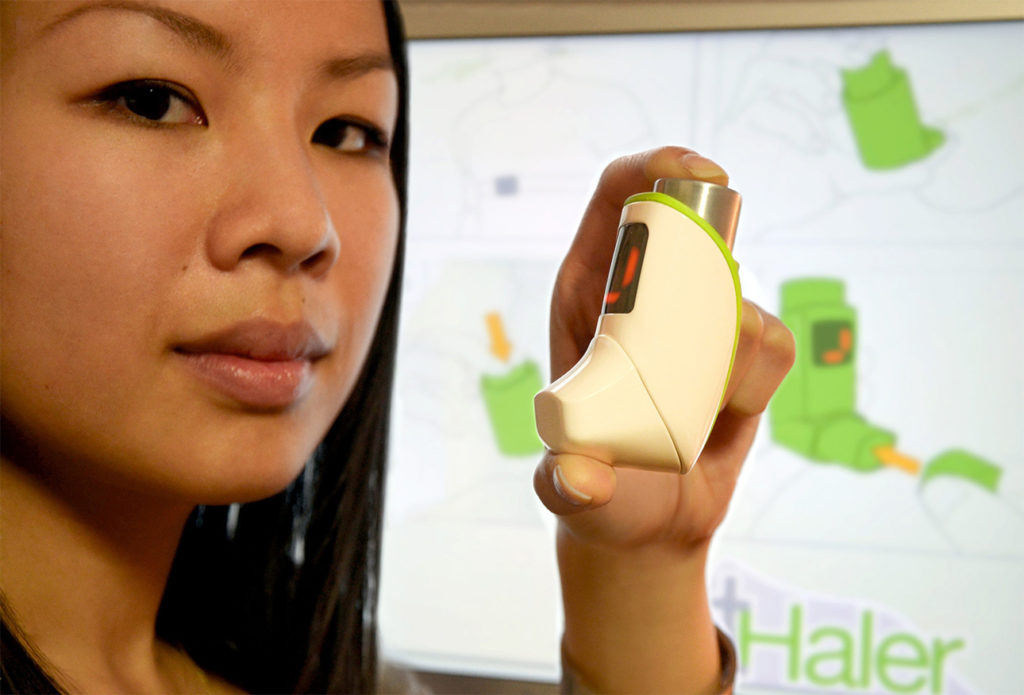 For people who live with the challenges related to asthma knowing how to properly use an inhaler can be life-saving. Asthma is frightening when attacks occur. One of the difficulties is not having the breath to call out for help. In Canada, like everywhere else, patients arrive at emergency rooms on a frequent basis. Studies indicate that both hospital admissions and sometimes deaths could be avoided if patients more correctly used their inhaler devices.

Medical personnel provides inhaler-use-training but there is no other avenue available to patients to perfect or practice the technique on their own and see how they are doing. A company in the UK, Cambridge Consultants, has addressed this problem by adapting wireless gaming technology to create a training procedure called the T-Haler. It allows patients to independently practice and improve inhaler effectiveness techniques. Such a device will be a welcomed option for new and older asthma patients alike worldwide.

Below is an in-depth article and video example of the training from the manufacture’s website.

On average, more than three Americans go to the emergency room every minute due to asthma attacks – and in the UK the figure is one person every seven minutes. So the T-Haler could be a truly life-changing technology. Poor inhaler technique prevents patients from receiving the full therapeutic benefit, and can often lead to more severe conditions that result in emergency room visits. According to the Asthma and Allergy Foundation of America, 5,000 people visit the emergency room due to asthma every day. And according to Asthma UK, an estimated 75% of hospital admissions for asthma are avoidable and as many as 90% of deaths from asthma are preventable. Studies show that, on average, three out of every four asthma sufferers fail to use their inhaler correctly and, while training can improve technique, it is mainly performed through observation and is generally ineffective.

With this in mind, Cambridge Consultants developed the T-Haler concept, a simple training device. Interactive software, linked to a wireless training inhaler, monitors how a patient uses their device, and provides real-time feedback via an interactive video ‘game’. T-Haler provides visual feedback to the user on their performance and the areas that need improvement. These tools could help the estimated 235 million asthma sufferers worldwide to get the most from their inhaler, and potentially reduce the millions spent annually on asthma-related emergency room admissions.

More than 50 healthy participants, aged 18-60, took part in a recent study conducted by Cambridge Consultants to test the efficacy of T-Haler. Before using the training system, the average success rate of the group in using an inhaler correctly was in the low 20% range – in line with numerous other studies carried out. The participants had no prior experience with asthma or inhalers and were given no human instruction beyond being handed the T-Haler and told to begin. The on-screen interface walked the group through the process, which takes just three minutes to complete.

“What was remarkable about the T-Haler in our own study was how quickly the participants learned, and how well that knowledge stayed with them,” said Kate Farrell, Senior Design Engineer, Medical Technology at Cambridge Consultants. “Without any human direction beyond the word ‘go’, participants went from around a 20% success rate without training to a success rate of more than 60% after only three minutes with the T-Haler device. This is more than twice the compliance rate we have seen in other studies with trained participants. Interestingly, a week later, 55% were still correctly using the device – showing that they retained what they learned.”

The T-Haler measures three key factors for proper inhaler use. First, whether the patient has shaken the inhaler prior to breathing in; second, the force with which they breathed in; third, when they pressed down on the canister (the step which releases the drug). These three variables can determine the efficacy with which drugs are delivered in a real metered-dose inhaler (MDI) device.

The T-Haler is the latest example of Cambridge Consultants applying its expertise in ‘Px’ development – the art and science of designing around the patient experience, often through a consumer lens. The firm was able to produce the training concept by taking a multi-disciplinary approach to the problem and drew on its expertise in human factors, user interface design, mechanical and electronics engineering, wireless connectivity, and drug delivery. Although T-Haler is not market-ready yet, the training concept was created to show what could be achieved with simple, well-understood technologies that are readily available, and the difference such a device could make in helping to reduce both the anguish caused and the cost of treatment for such a common disease.

As healthcare trends toward a focus on preventive care and devices, which offer greater consumer appeal and compliance, innovations such as the T-Haler may soon become the norm in doctors’ offices, pharmacies, and clinics.