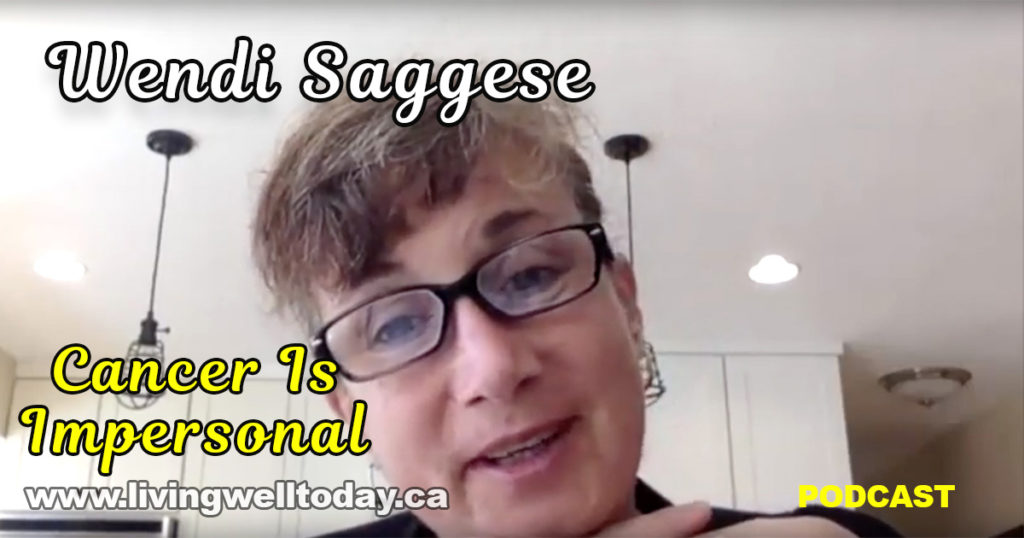 What a delight to talk with Wendi Saggese from San Diego, California. Wendi lives with stage four cancer and is a great example of someone who taps into a deep sense of joy and is not stopped by her current health circumstances.

Life is much easier when you remain neutral, this is something Wendi discovered the hard way.

Wendi admits to a 40-year history of searching to fix herself. As an adult, she wrestled with not feeling like she was enough. Throughout the ’70s and ’80s, Wendi explored a variety of new-age self-help therapies. She even worked for Tony Robbins and Byron Katie along the way. Some techniques helped but in the end, she never felt satisfied.

Frustrated, Wendi reached a point where she gave up trying to fix herself. She let herself be miserable.

During the first two years of living with her cancer diagnosis, Wendi Saggese admits she had a hard time dealing with emotional suffering. A lot of fear surfaced whenever she was scheduled for scans and consultations. It was a rough time for the whole family.

Both she and her husband struggled with depression over the years and at one point Wendi encouraged him to seek help. By chance, Wendi’s husband stumbled upon a psychiatrist who practiced The 3 Principles – a body of work developed by the late Sydney Banks.

After returning from his first session Wendi thought her husband seemed changed, there was a noticeable shift. Intrigued, Wendi decided to go see the same practitioner. Whatever he said to her during their session enabled her thoughts to settle down. Wendi felt quiet. Remarkably quiet, like a newborn baby who did not have a lot of thoughts.

Curious to know more about The 3 Principles led Wendi to discover the work of Pransky & Associates. Signing up to attend a 4-day retreat proved to be life-shifting; Wendi experienced a profound awakening. It was as if she woke up and suddenly saw she was fine and did not need fixing.

The biggest difference, Wendi says, is she no longer operates from a bad feeling about life. Now, she sees life as an inside-outside experience and knows she is enough.

The world does not make us feel a certain way, our thinking makes our bad feelings. Life is impersonal; bad things just occur.

This emotional life-shift helped Wendi to see her bad feelings about cancer came from the inside – from herself. Realizing this stopped her chronic state of sadness.

Even now, after five years of studying and working with The 3 Principles as a coach, Wendi says she continues to evolve into a more peaceful way of living.

No longer a victim of her feelings, Wendi knows bad feelings will come and go and that’s okay; it’s the normal cycle of being human. Feelings are transient, they don’t need to be fixed the minute they become uncomfortable.

In fact, according to Wendi, the effort to try and change a bad feeling actually feeds it, gives it meaning. If we leave it alone – it will shift on its own.

Wendi says she does not experience cancer, she experiences her thoughts about cancer. Once she came to understand this difference she felt a sense of relief. Cancer became impersonal.

Initially, Wendi would wake up in the middle of the night with a busy ‘monkey brain’ and try to figure out how to fix her cancer. Now, she no longer falls into this fearful trap. Instead, she redirects her attention and will watch a movie or read a book. It’s a relief to know she does not need to figure it all out – there and then at 2:00 am!

Wendi says she can now allow herself to become emotionally neutral more quickly. Doing so calms her down. As a result, her wisdom, or life force, is elevated – which makes for better problem-solving.

Since learning about The 3 Principles, for Wendi, there is less suffering about having cancer and more enjoying life on an on-going basis.

If you want to learn more about all the wonderful things Wendi Saggese is up to, or to connect with her, you can find her online.

Update: Wendi has sadly past on since we did this interview.