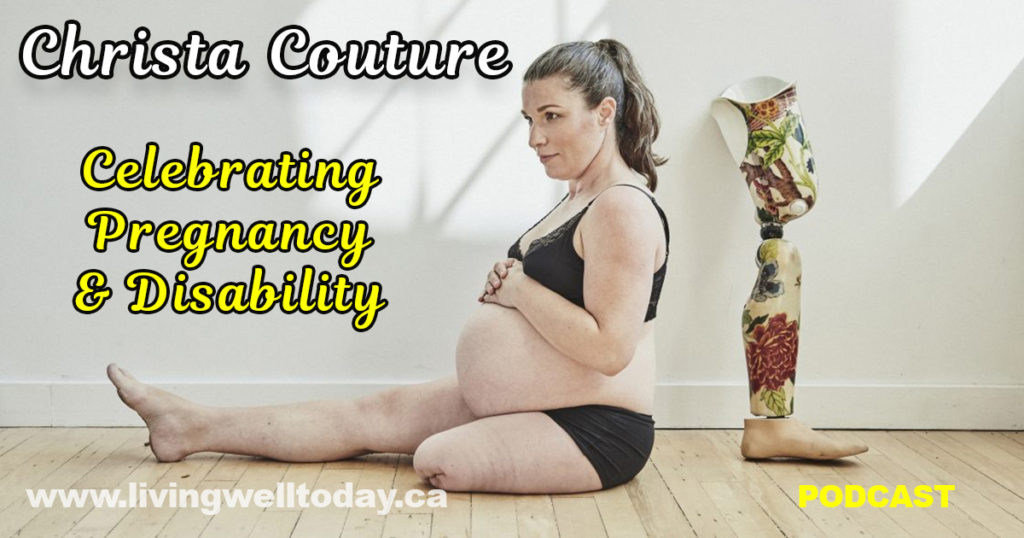 Christa Couture joined me on the show to talk about a maternity photoshoot she did in 2017, that highlighted the beauty of being pregnant and having a disability.

Since the inception of my doing the Living Well Today show, Christa is now the third person I have had the pleasure of encountering in the flesh. It’s not so much that I actually met her, it’s more I often see her at a music-related conference we both attend.

Just to clarify, I am not a musician in any way, but my partner is involved in radio. Therefore, we attend a provincial music industry conference (Folk Music Ontario) each year. I do, however, provide a training presentation on accessibility to encourage festivals to be universally inclusive by removing as many physical barriers as possible.

Other than that – for three days I get to be an audience representative. It’s pretty amazing to experience musicians up-close-and-personal and enjoy their performances.

Christa Couture, on the other hand, is an award-winning musician, recording artist, and a very talented non-fiction writer and speaker.

Her fourth album “Long Time Leaving” was released in 2016 on Black Hen Music; her writing has been published in Room, Shameless, Augur, and the anthology “The M Word”. As a speaker and storyteller, she has addressed audiences for CBC’s DNTO, Moses Znaimer’s fabulous conference called ideacity, and the Imaginate event in Port Hope, Ontario. 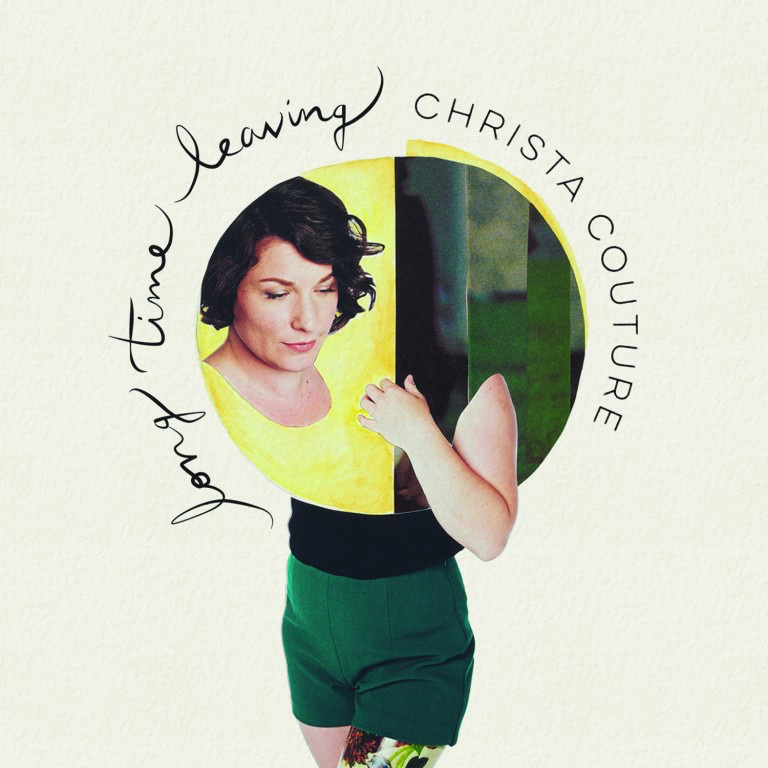 Christa also happens to experience her life with a disability.

At the tender age of thirteen, Christa became an amputee. This surgery was necessary, as she puts it, to cure herself of cancer. And, while she also acknowledges that she was fortunate to be cured, she also experienced the ups and downs of acceptance of disability.

I found it interesting when Christa said she spent many years trying to “pass” as a two-legged person. Most people, she says, can not tell she has a prosthetic leg unless they happen to see how she climbs stairs. One leg at a time.

Clearly, Christa’s level of acceptance pivoted four years ago when she decided to celebrate her prosthetic leg in a visual manner. It now displays a beautiful floral design. It’s impossible not to notice.

When I first noticed Christa Couture wearing it at the conference, I likened it to seeing a garden walk by.

Apparently, it is not hand-painted as I first thought. Instead, it is a portion of upholstery that Christa had lamented on to her prosthesis. As she describes it, its floral features have become a favourite accessory. 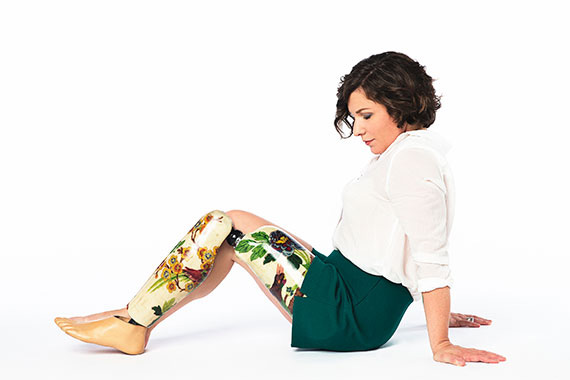 Based on her surname, Couture, I assumed Christa might be of French descent. Instead, she is proudly Indigenous (mixed Cree and Scandinavian).

Cree culture, as in many Indigenous cultures, provides children with a traditional name in a ceremony. The chosen name speaks to the individual’s role in the community, their gifts, and their duty to use those gifts going forward.

In Christa case, a the age of 2 years, she was given the traditional name Sanibe (say nee bay), which means, singing woman. It’s not actually a Cree word because the elder who provided the name was Arapaho.

“She will sing and talk a lot” the elder said.

This wisdom has indeed come to fruition when you consider Christa’s music, writing, and speaking career.

Christa was prairie-raised, spent 17 years in Vancouver but now calls Toronto her home.

Since fashion magazine, Vanity Fair’s 1991 iconic photograph of pregnant actress Demi Moore, pregnancy photos have become fashionable. It is considered to be one of the most influential images of all time. Ms. Moore’s photo was taken by Portraitist Annie Leibovitz. It was the first mass-media image to depict pregnancy as a beautiful passage of time.

You could say an entire photography industry blossomed as a result of the 1991 magazine cover. Now, many famous and nonfamous women opt to capture this remarkable life-changing event in photographs.

Christa Couture looked online for examples of maternity photos of women with disabilities, but could not find any. Frustrated with the lack of disabled representation, she decided to make her own.

As a performer, Christa has had hundreds of photos taken of herself. Although, she admits it did take time to feel comfortable in front of a camera. Impressed by the self-portrait series on body difference by Toronto based photographer, Jen Squires, Christa asked Jen to work with her. 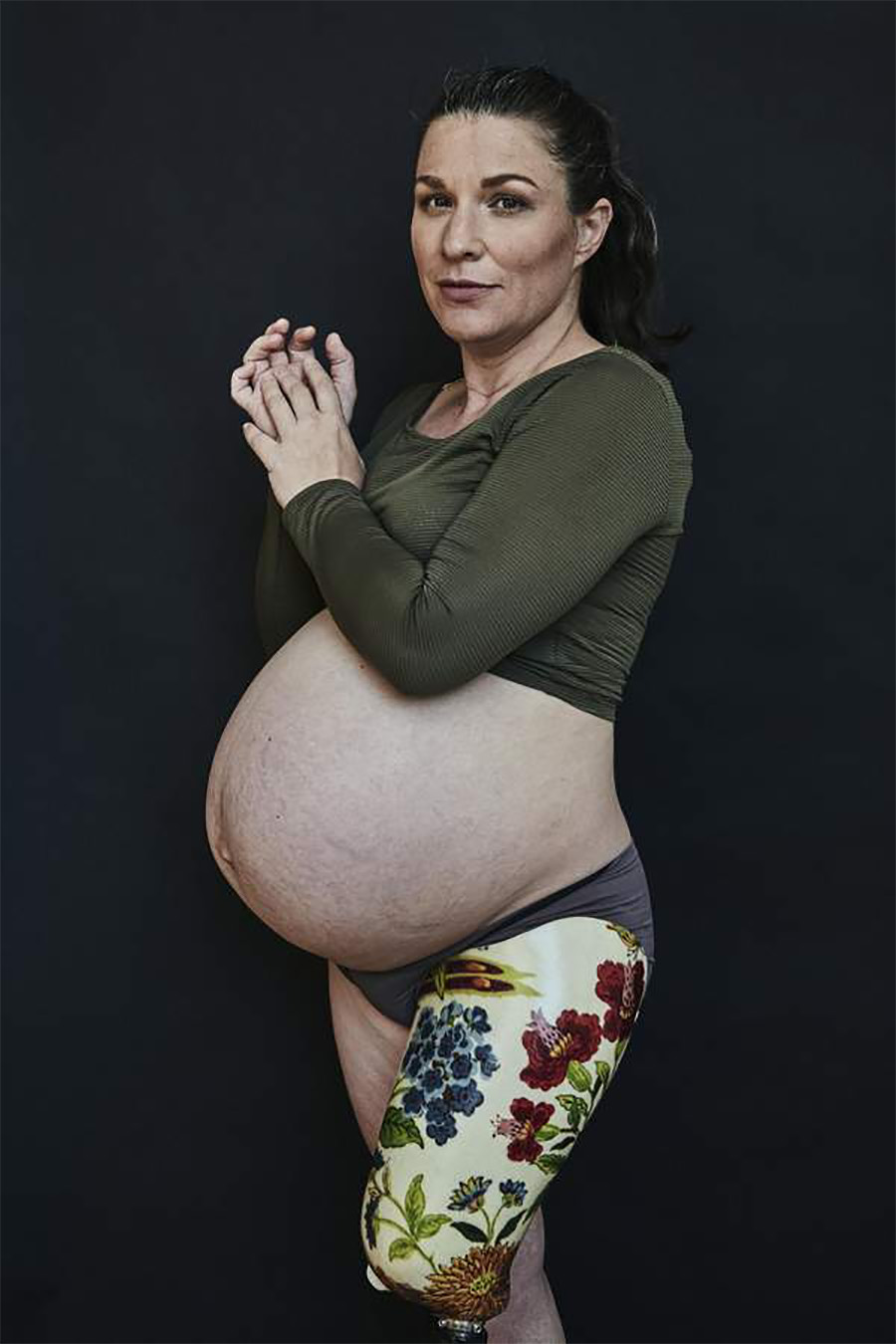 The maternity photoshoot started with Christa showing her “baby bump” wearing her prosthesis and later without. She could see the photos previewed on the photographer’s laptop as they were being taken. When she saw the ones without her prosthesis, the tiny voice in her mind said, “that looks incredible.”

The photos captured the celebration that Christa longed to see reflected back to her – an almost full-term pregnant belly carrying a baby she couldn’t wait to meet.

Christa hopes other women with disabilities searching for images on disability and pregnancy will find her photos and feel empowered by them.

It would be safe to say her hope has been granted. 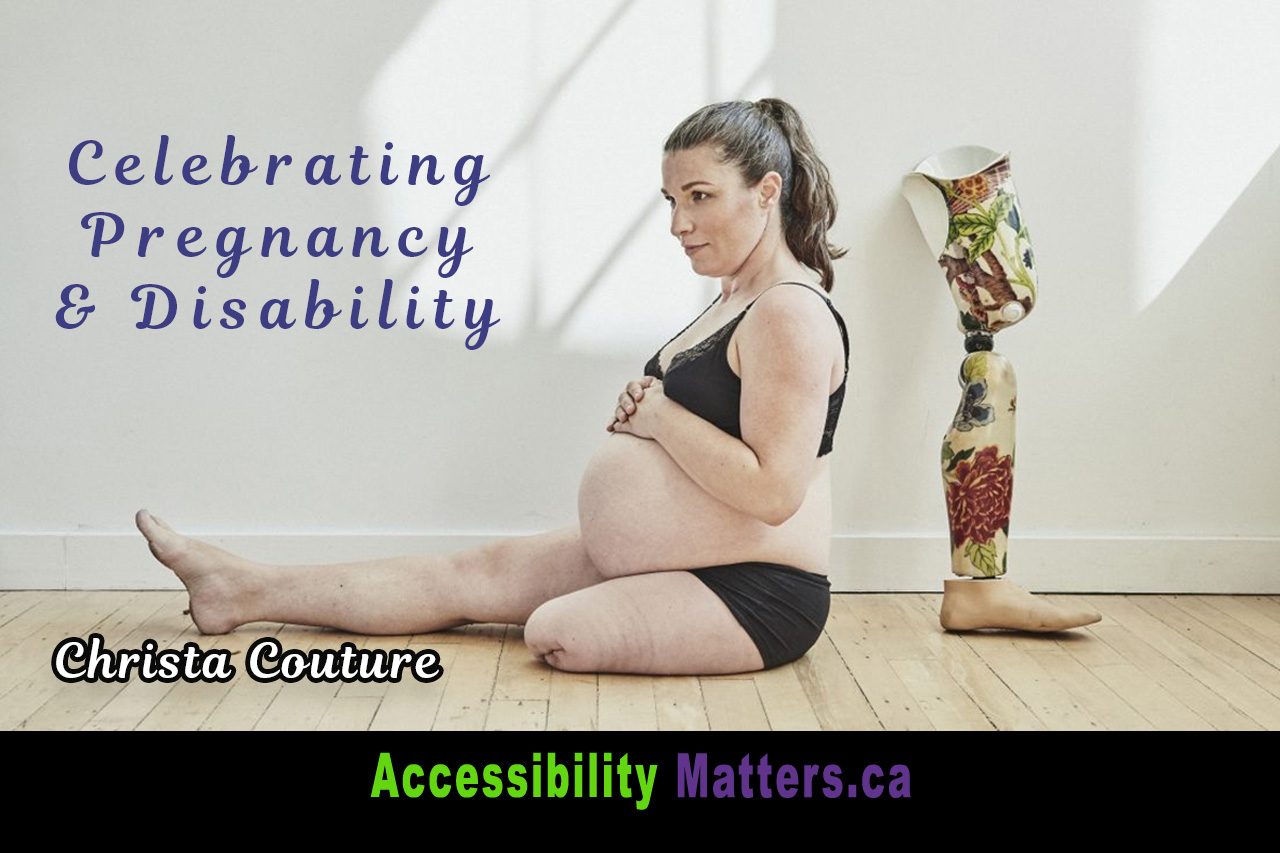 Not only did she inspire women like myself who have a disability, she caught the eye of the world. Her lovely pregnancy photographs and story were shared far and wide by – Baby Center, Bustle, Babble, Bloom, Metro Morning, Metro UK, The Mighty; and many more!

In October of 2017, Christa delivered and finally met with her beautiful healthy daughter, who is named, Sona. 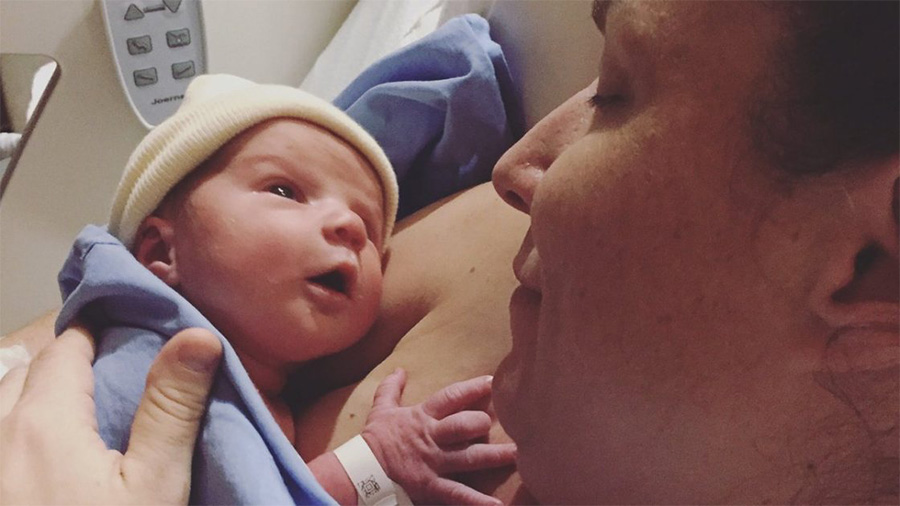 Life, Christa says, is beautifully small because it revolves around the baby’s needs. She and her partner delight in Sona’s every moment.

Winter in Toronto is not the easiest time for Christa. Snow is a real barrier to anyone with mobility challenges. She looks forward to the nicer weather and being able to spend time with her baby outdoors.

I’m not sure exactly what rock I was living under, but until our interview, I was unaware of Christa heart-breaking story of losing two boys. One shortly after birth and another before the age of two years. Christa has a profound understanding of grief and life.

I admit my focus was on her being a musician who has a disability, simply because that was our mutual connection. I’ve since immersed myself in her blog writings and songs and have been deeply touched by the brave beauty she illuminates in all that she does.

It reminded me once again, how we can never know what life experiences another may encounter and endure.

Here is a video example of Christa

To learn more about Christa, view her photoshoot, listen to her music, or read her wonderful blog, she can be found online at:

Another talented performer we interviewed, Kari Lynn Hewett,  also did a striking visual display of her experience being bald during her cancer treatments.