LWT 025: Christian McNeil – Being Her Best Self 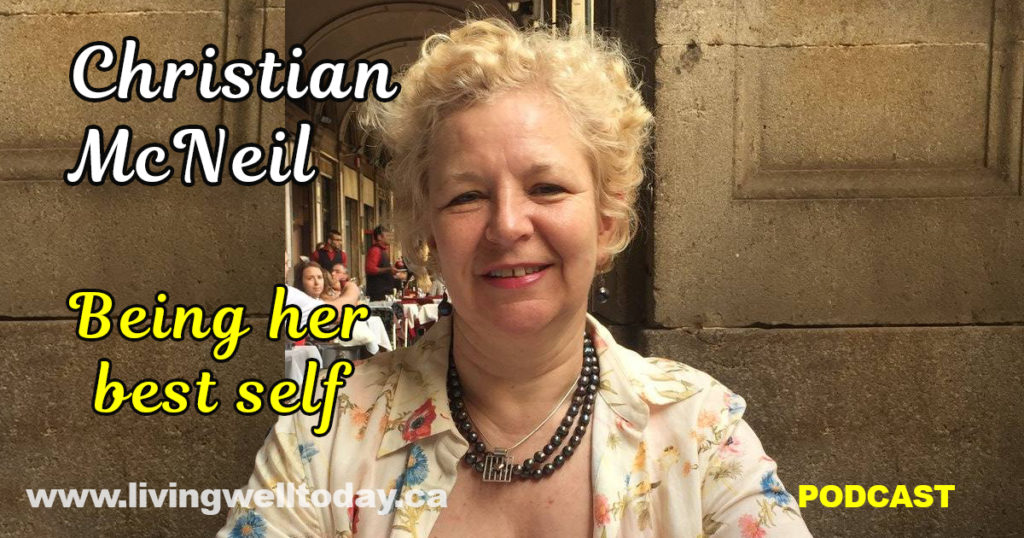 It was delightful and refreshing to speak with Christian McNeil up close and personal about her encounter with addiction. And, more importantly, her ability to reach an understanding that all is well in life even if or when one may dip in and out of chaos at certain points along the way.

The important precursor to change, shift, transformation, or whatever terms suits you best, always comes back to inner awareness. As the old saying goes …once we know better than we do better.

Christian is a long-ago recovering alcoholic and later in life, at age 50, she was diagnosed with ADHD. I loved how Christian referred to these experiences and labels as propensities. Propensities are defined as having an inclination or natural tendency to behave in a particular way. This suggests to me that Christian has an understanding that while a  behaviour may come to mind she does not have to act upon it. Addiction, like other conditions, is shared amongst the great universe that we all enjoy and yet, some of us struggle against particular issues more than others.

Learning of the work and the understanding of the Three Principles helped Christian grasp this clearly; cementing that she, in fact, was not broken or damaged due to her past encounter with alcoholism. However, like many who encounter addition, she was not fully aware of its negative impact on her life until she hit a crisis point during her twenties. Laughing, she wonders how she missed it and acknowledges she was what is termed a functional alcoholic.

Her demanding work as a court lawyer did not suffer greatly but her personal life on the other hand did. Christian used the word ‘shambolic’. Emotional relationships were not stable and became increasingly more chaotic, that is until she shifted her awareness. Getting sober, according to Christian saved her life and at the same time gave her an inclining of a spiritual dimension.

Yet, being sober did not resolve everything and Christian embarked on a quest to discover why she was the way she was. It frustrated her why life continued to be full of ups and downs. With her lovely laugh, she admits that at no time did it occur to her that ups and downs were the norms in life.

While Christian continued to do well in her legal career, her quest, of which she calls her secret searching side caused her to take a buffet of self-help seminars. This went on for many years until she discovered the Principles eight years ago. She actually stumbled upon it as she had enrolled in an NLP training with Jamie Smart. However, unbeknownst to her, Jamie has discovered and then shifted his work to be 3 Principle-based.

During this event, Christian felt she had found what she had been searching for, and that feeling has not ever left. Not long after, Christian had a profound insight where she realized if she was to have any quality of life she had better listen to herself.

Wow, how freeing, she reached the point where she knew that she alone was her truest source.

She understood that the waves of life are just that – and are not an indication that something is broken. It sounds trite but there is such wisdom it truly grasping you are a human, simply participating in the human condition.

Christian sees the Principles as a good jumping-off point to tackle any issue and she works now sharing this understanding with others and particularly with organizations.

As a final note, my favorite point of wisdom taken from our conversation was when Christian said, “your best self is your authentic self”.

Yes, let’s have more of that!

You can learn more about or connect with Christian at ElementsOfWellbeing.net

Be sure and stop by her Facebook page to see what’s coming up.