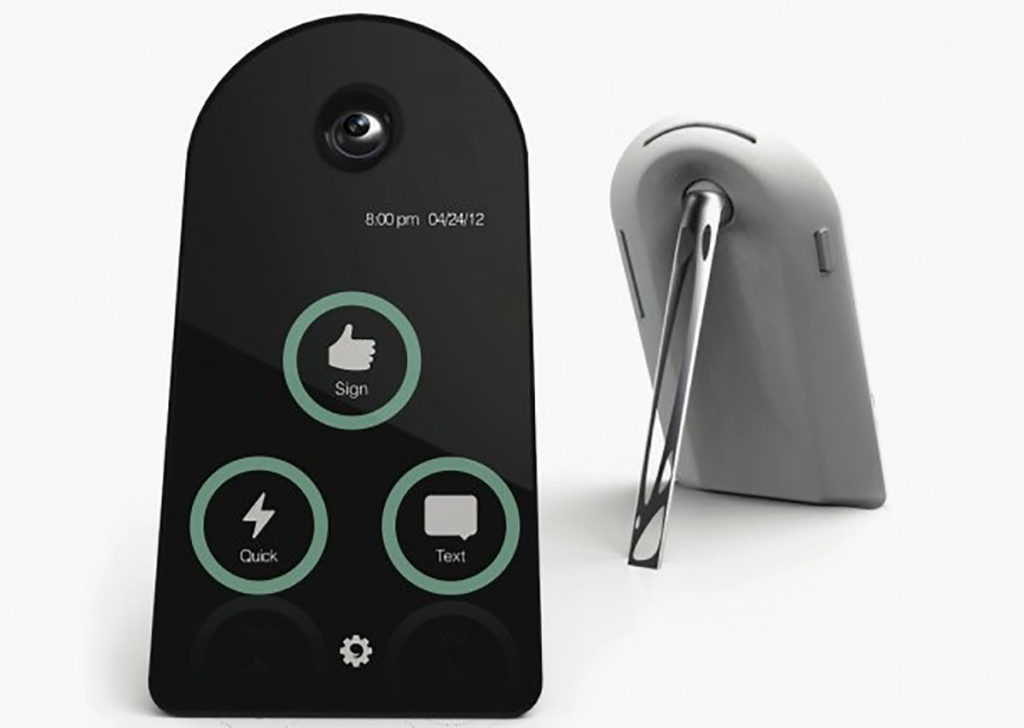 Can you imagine how life changing it would be if the deaf could understand us and we could understand them without us having to know how to sign using ASL (American Sign Language)? Well, students from the University of Houston are working on just that and have developed a prototype device called My Voice. The, my voice device is a handheld device that hopes to revolutionize communication and remove a long-standing language barrier between those who can hear and those who cannot.

Too often, communication barriers exist between those who can hear and those who cannot. Sign language has helped bridge such gaps, but many people are still not fluent in its motions and hand shapes.

Thanks to a group of University of Houston students, the hearing impaired may soon have an easier time communicating with those who do not understand sign language thanks to the my voice device. During the past semester, students in UH’s engineering technology and industrial design programs teamed up to develop the concept and prototype for MyVoice, a device that reads sign language and translates its motions into audible words. Recently, MyVoice earned first place among student projects at the American Society of Engineering Education (ASEE) – Gulf Southwest Annual Conference.

MyVoice’s concept focuses on a handheld tool with a built-in microphone, speaker, soundboard, video camera and monitor. It would be placed on a hard surface where it reads a user’s sign language movements. Once MyVoice processes the motions, it then translates sign language into space through an electronic voice. Likewise, it would capture a person’s voice and can translate words into sign language, which is projected on its monitor.

The industrial designers researched the application of MyVoice by reaching out to the deaf community to understand the challenges associated with others not understanding sign language. They then designed MyVoice, while the engineering technology students had the arduous task of programming the device to translate motion into sound.

“The biggest difficulty was sampling together databases of images of the sign languages. It involved 200-300 images per sign,” Seto said. “The team was ecstatic when the prototype came together.”

From its conceptual stage, MyVoice device evolved into a prototype that could translate a single phrase: “A good job, Cougars.”

“This wasn’t just a project we did for a grade,” said Aleman, who just graduated from UH. “While designing and developing it, it turned into something very personal. When we got to know members of the deaf community and really understood their challenges, it made this MyVoice very important to all of us.”

Since MyVoice’s creation and first-place prize at the ASEE conference, all of the team members have graduated. Still, Aleman said that the project is not history.

“We got it to work, but we hope to work with someone to implement this as a product,” Aleman said. “We want to prove to the community that this will work for the hearing impaired.”

“We are proud of such a contribution to society through MyVoice, which breaks the barrier between the deaf community and common society,” added Attarzadeh.

UH’s Industrial Design program in the Gerald D. Hines College of Architecture grooms aspiring designers through a calculated curriculum program. First-year students learn design fundamentals in the classroom and the studio. During their second year, students familiarize themselves with industrial design history, materials, manufacturing methods and visual communications skills. Third-year students conduct research and apply their findings to design projects. By their fourth year in the program, students are prepared for careers through curriculum addressing diverse design issues, design ethics, business practices and strategies. In 2013, UH will debut a graduate program in industrial design.