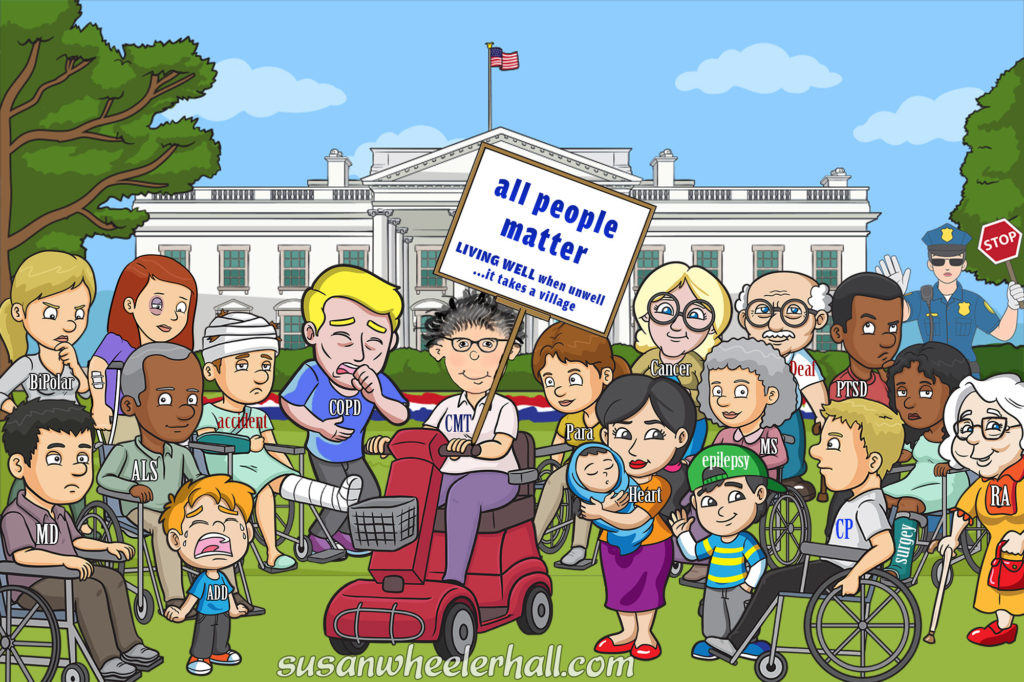 The news headlines of late are filled with a great deal of political turbulence. It is next to impossible not to be affected by the topsy-turvy presidential election results from the United States. It would be an understatement to say, change is in the air.

People who experience their life with chronic illness or life-long disabilities face the ramifications of unwanted change on a daily basis. Making adaptions and doing whatever it takes to minimize negative impacts becomes a way of life. The luxury of taking things for granted fades and is replaced with an awareness of life’s fragility.

Strengths and weaknesses differ for everyone but we know it’s the “mighty” who rise and the weak who fall.

Where one lies on the mighty continuum is dependent on many factors, such as wealth, geography, education, gender, race and much more. Health, however, is the one constant at the base of all variables. And, while it is true that all the riches in the world cannot buy health, it would be a mistake to think economics and privilege cannot ameliorate health challenges.

My disability, for instance, requires that I use a plethora of devices such as leg braces, a walker, a cane, a scooter, a breathing ventilator, all of which tally up to a considerable amount of money. These are the absolutes, without which I would not be able to sustain my life and mobility.

As a Canadian, I am fortunate and appreciate that my government supports the acquisition of these essential aids. Other items such as safety bars, ramps, car modifications, an adjustable bed, a chairlift, raised toilets, a roll-in shower and the like are luxuries, that I am grateful to have. Together, these items make my life easier, safer, and more enjoyable. They are costly, but the onus for purchasing them is on me.

Living with a significant health challenge is expensive and yet the ability to work in the traditional sense is often restricted. For many, this is a no-win situation that further slides them down the social scale.

`We, my friends, are the most vulnerable …but we are not alone. In fact, according to the World Health Organization, “more than one billion people live with some form of disability, of whom nearly 200 million experience considerable difficulties in functioning.”

Given that more than 14% of the US population is aging and upwards of 20% already report as disabled, this suggests that a good number of people will be impacted by the sudden shift within their political sphere.

The new head of state continues to boast to Americans, and to the world, that the goal is to “make America great again”.

What defines greatness is controversial, but it saddens me to think in this regard “greatness” has been used as a marketing ploy.

I empathize and feel concern for the vulnerable American citizens who stand on a rug that is about to be pulled from under them.

What is to unfold is not known but Mahatma Gandhi put it best when he said, “A nation’s greatness is measured by how it treats its weakest members.”