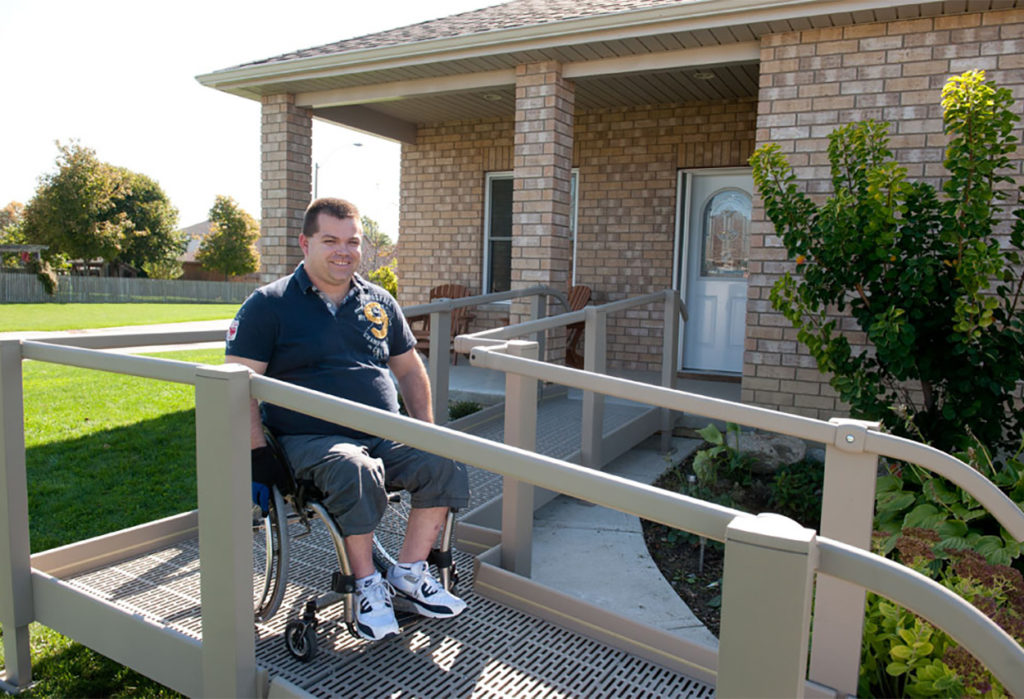 QRamp™ is a relatively new ramping system that is making quite a bit of buzz for itself in the accessibility world and rightly so because it is simply a fantastic product. QRamp accessible home ramps meet all the checks and balances and then some. I had the pleasure of interviewing the folks at QRamp a while back.

Derek McGivern, whose professional background and personal connection to access issues, is the inventor of this amazing ramping product.

Along with several other excellent folks who worked to support the success of QRamp™, Derek picked up the 2013 entrepreneur of the year of award from the Wallacebuurgh Chamber of Commerce Business and Community Excellence Awards.

QRamp™ is an accessible home ramps system that is designed for quick and easy assembly, and it actually looks nice outside your home. It’s packed with exclusive safety features that other ramps simply don’t have.

Access should be designed to stay with the person, not the property

QRamp™ was designed by Derek, who is also the father of a child with Cerebral Palsy. He realized that access to their home was becoming difficult as his child grew. Long term they may need a different, more accessible home but in the meantime, they needed safe access now. He wanted a product that included some of the following features:

Wood ramps can be imposing, permanent and require ongoing maintenance; they’re also very slippery. While they are lower in cost up front, they are not so handy if and when you move. A move means a whole new build and more costs. Aluminum ramps are complicated and institutional looking and fail to address some of the most rudimentary safety concerns with ramping.

QRamp™ is designed so that on moving day in as little as 2-3 hours’ work anyone can remove access ramping from one home and install it to another home, even if a totally new configuration is required. QRamp accessible home ramps are modular and easy to put together.

If you want to move your QRamp from the front door to the side door, again requiring a different ramp layout – no problem. With QRamp™ –  its unique and simple modular design enables you to install and reconfigure your access needs in just a few hours.  Unmatched safety and Flexibility is the QRamp™ advantage!

Have a look at their website to learn more and see examples. You can also see QRamps up close at many health care retail outlets too. In fact, more and more retailers are bringing them in stock because they solve a big problem and offer a superior product.

QRamp™ can be purchased through a variety of health care retail stores across the country.

Check out this video:

On an International level – the QRamp is used for Qantas Link Airport.

This is fantastic news. I always find getting off and on smaller planes is a real hassle when you need access support.