The well-known saying, “there’s no point in reinventing the wheel”, implies, that if something works then just leave it alone. Well, Rowheels has blown that theory right out the window and really has reinvented the wheel. Wheels used to propel manual wheelchairs. Their Rev-HX wheel design reverses how a person propels the wheelchair movement. Usually, hands reach back and grab hold of both wheels by their rims and push forward. The Rev-HX design turns that around and instead users pull the wheels backward in order to move the wheels forward.

If this is hard to picture, trust me, once you see it in motion you’ll understand the difference.
Take a look at this video:

I’d say it was high time to reinvent the wheelchair. Especially, when you consider the manual push wheelchair was first (recorded) invented in 1783 by John Dawson, of Bath England. And, the first X-frame, foldable model was designed in 1932 by Everst and Jennings. Of course, wheelchair versions did modify over the years but the wheeling engineering process required to propel it forward stayed consistent.

One of the biggest problems associated with manual wheelchair use is the repetitive injuries to users’ shoulders. The motion required to push the wheels forward is hard work. I used a wheelchair for two years following a lengthy illness and I can attest to the associated shoulder pain. Even though I had a zippy model my shoulders were increasingly sore and I opted to use a scooter in its place.

Rowheels was founded in 2012 with a goal to develop the reverse propulsion wheel to help wheelchair users suffering from repetitive stress injuries of the shoulder. Pushing movement is inefficient and leads to injuries, whereas pulling reverses the shoulder strain and moves wheelchairs forward faster with greater ease.

The Rowheels Rev-HX design takes advantage of larger more capable upper body muscles. Imagine the movement needed to row a boat, that’s how it works. Apparently, this reduces the effort needed to move a wheelchair, and using upper muscles benefits posture and fitness. Even better, Rowheels lets you use push or pull motion to move forward.

Also, a unique braking system is built in between the handrim and the wheel and this enables braking and steering functions with an inward push. Which again, lessens the need for a strong grip.

Another excellent feature is how much easier it is on the hands for attaching the wheels. A “tri-handle’ is easy to grab and a simple push release button gets the job done. A lot of thought has gone into making options to lessen wrist strain such as the optional oval handrims or the Q-grip handrail. Rev-HX wheels are compatible with most manual wheelchair models, such as Quickie and Invacare. Although, they do add an extra 2lbs to a standard 32 steel spoke wheel, but with more efficient muscle use this will not be a deterrent overall.

This Video explains it best! 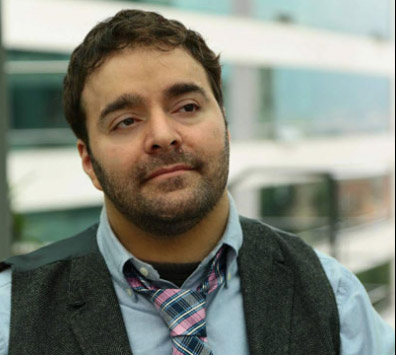 Salim Nasser is the inventor of Rowheels and serves as Chief Technical Officer and is a member of the board of directors. He is the technology visionary for Rowheels responsible for new product design, engineering project management, market analysis, product testing, usability and interaction with the industry.

Nasser is also employed as an Aerospace Engineer at NASA’s Kennedy Space Center and designs and analyzes flight and ground projects including the Space Launch System (SLS) Program.

It would be fair to say that Nasser understands the issues of wheelchair users. He himself has used a wheelchair since the age of 20 when he became a quadriplegic as a result of a spinal cord injury which left him paralyzed from the chest down.

Following his accident, he moved to Florida to rehabilitate and was able to regain some shoulder and arm strength. There he attended school and received a degree in mechanical engineering from Florida International University.

The redesign of the wheelchair wheeling system started as a senior design project for Nasser while in college. Along with a small group, he worked on it but the project sat on the shelf for a few years. Nasser revisited his idea and in 2010 entered the NASA Tech Briefs “Create the Future” Competition (2017 is now open). He won! 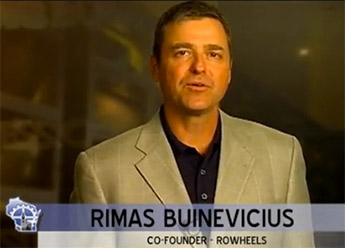 His contest win led to getting noticed. Nasser was contacted by Rimas Buinevicius, a software company executive who spent time in a wheelchair while recovering from a broken leg. Buinevicius found using the wheelchair for even a short time caused arm and shoulder pain. Timing is everything, and together they moved the idea forward into reality and founded the company in 2012.

This is an exciting and needed product. In all likelihood, I will need to use a wheelchair in my future and after learning about Rowheels, my fear of hurting my shoulders is now much less.