The Four Walls of my Freedom 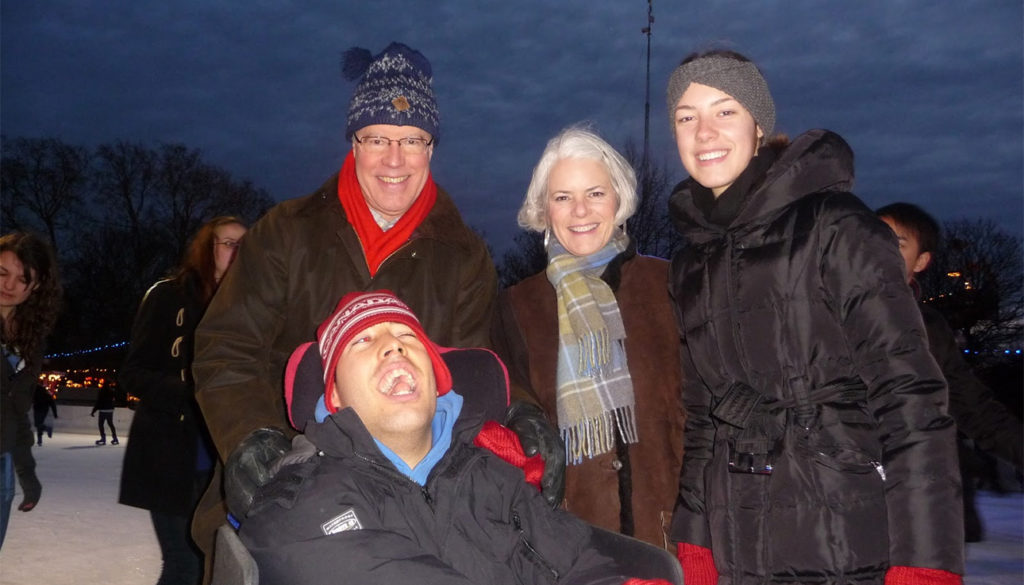 Donna Thompson’s first book, The Four Walls of My Freedom is a narrative of her family experience with a disability as seen through the lens of Amartya Sen’s “Capability Approach”. Thompson addresses the bigger questions about the value of human life. As the wife of Jim Wright, Canadian High Commissioner to Britain, Donna is well-traveled and has participated in political advocacy for social issues and in particular for disability rights on her own accord. The mother of two, she has cared for her now twenty-six-year-old son Nicholas, who was born with cerebral palsy most of his life. Now that he has full-time care at home, Donna has reflected on her experiences and in her book points out the merits that to give and receive care are good for all of society.

Below is an article I came across written by Elizabeth Renzetti, from London’s Globe and Mail. Published Sunday, Sep. 05, 2010.

Donna Thomson, the wife of the Canadian high commissioner to Britain and disability-rights pot-stirrer, leads the way up a grand staircase at her official London residence and leaves one life for another.

Below, in the tasteful maple-syrup decor of the reception rooms, she and her husband, James Wright, entertain world leaders, business tycoons, and, recently, the Queen and Prince Philip. In the private apartments above, they live with their severely disabled 22-year-old son Nicholas, who has cerebral palsy and is supported by 24-hour attendants, his chronic pain managed with anesthetic delivered by a spinal-cord pump.

“Hello, mister,” his mother says, entering the bedroom where Nicholas, in his wheelchair, is watching TV. His room is decorated with souvenirs of his favorite teams, the Ottawa Senators and Liverpool FC. Ms. Thomson asks if he’s bought to tickets to see the England football team play at Wembley; Nicholas, handsome and dark-haired, responds with one of the few words in his vocabulary, “yeah.”

Later that day, Ms. Thomson will leave elegant Grosvenor Square (the U.S. embassy is across the road, Selfridges a coin’s throw away) and maneuver Nicholas onto a London bus, the only way to get to the neurologist’s office. The official high commission car (license plate: Can1) can’t accommodate his wheelchair.

How many of the guests dining on Arctic char and Niagara wine downstairs would know that there is a whole other level to Ms. Thomson’s existence – an upstairs where things aren’t quite so perfect? “Would they know that I have one foot in ICU and one foot in Buckingham Palace?” she says wryly. “It is a very odd life.”

More people will uncover this duality with the publication next week of Ms. Thomson’s book The Four Walls of My Freedom, an account of Nicholas’s life but also a moral, philosophical and economic examination of how we assess the value of life, especially one that seems, in our price-tag culture, to lack worth. She admits, quite happily, that she wants to turn conventional thinking about disability around and to provoke radical change in a government that has provided such a nice roof over her family’s head.

Nicholas’s motto, his mother says, is “piss on pity,” and it’s likely that she’d have that emblazoned over the historic door at 3 Grosvenor Square if regulations allowed. After years as a disability-rights campaigner in Canada, Ms. Thomson had no desire to tell her family’s story: “The disability community did not need another piece of misery porn or worse still, inspirational lit,” she writes in The Four Walls of My Freedom. Oddly – for it’s the heart of her book – she didn’t think anyone would want to read about her family’s struggles: How she was once investigated, and cleared, by child welfare for giving Nicholas too much pain medication; how her decision to force him into his wheelchair to go to school every day probably worsened his pain. Speaking about this is the only time she becomes even mildly choked up: “I didn’t want to give up on thinking he could be an active person. … I couldn’t accept it. And now I can.’’

She decided she might have something to add to the debate about disability when she discovered the “capability approach,” a method of assessing the potential of the lives of the world’s poorest, devised by Nobel-prize winning economist Amartya Sen.

“Sen had done a lot of work in exploring the ways in which people can have a life that they value,’’ says Ms. Thomson, 55, after we’d moved downstairs and sat beside a totem pole to talk about her book. “It was an epiphany.”

She began reading everything she could by Dr. Sen and by other economists and moral philosophers who were examining different ways of measuring well-being and potential, especially among people at the margins – the very poor, the disabled. What if life was judged not by its monetary worth or possible economic benefit to society, but as a series of complex and rewarding relationships? What if the act of caring – for an elderly relative, a neighbor or a disabled son – could be seen not as a burden, but as a gift? What if voluntary caregivers were given financial rewards, tax breaks, time off work?

Ms. Thomson tried to track down Dr. Sen, who was teaching at the University of Cambridge, to see if he thought the capability approach could be used to assess a person with a disability, but every time she went to hear him speak, he was mobbed by adoring fans. “He really is a rock star in that world,” she says.

Eventually, she badgered him into meeting her at Trinity College in Cambridge, and was fully prepared, if he had pooh-poohed her ideas, to say, “Oh crap. I’ll have to throw out the book.” Instead, Dr. Sen listened politely and said, “I think it’s a very valid approach, and I’ll be interested to see the results.”

While she wrote the book during the four years her family has lived in London, Ms. Thomson says its “extremely political agenda” is aimed at her home country, where she thinks a radical new deal is needed. She points to the Ontario government’s mandatory volunteering requirement for high-school students as one way to go, or vouchers, which would be given to caregivers who could then “spend” them on services as they chose or tax breaks for companies with progressive social policies.

Ms. Thomson writes eloquently about the loneliness of the caregiver: As a young mother in Ottawa, she had two degrees, a promising career in theatre and spoke Russian, but spent most of her time alone caring for Nicholas and his younger sister, Natalie, while her husband was handling security files at the Department of Foreign Affairs.

On the morning we meet, the British papers all report a story about a severely disabled young woman who’d been found dead next to the body of her mother, her sole caregiver. After the mother died, the young woman starved to death. Ms. Thomson, of course, had read the reports.

At one point, she notes, the mother had put a bed sheet with the word “help” on the roof of her house. The local authorities offered support, “but it was stuff she didn’t want. It’s so awful.”

The mother was named Stephania Wolf, and her wheelchair-bound daughter was Samantha. They made the front pages for one day in August, and then they were gone.