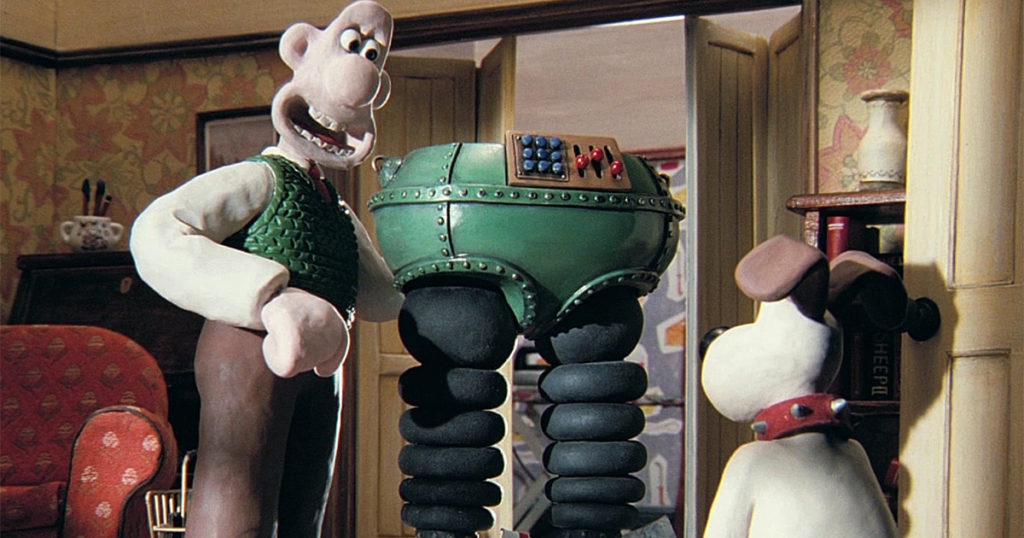 One of my favorite cartoons is the Wallace and Gromit clay animations. My partner recently shared an article called “The Right Trousers” with me that she came across from the UK Guardian Newspaper. We watched the episode mentioned in the article called – “The Wrong Trousers” and she recalled my comments at the time.

Inspired by the show and in jest, I said it would be great if someone could design “The Right Trousers”.

Well, it appears the universe heard me!

During the start of the animation, a sleepyhead Wallace wakes up and Gromit flips the switch and this propels Wallace down a conveyor belt. Along the way, his trousers are ready for him and he effortlessly slides into them before landing at the breakfast table.

I loved this scene!

Most people, once they’ve decided what to wear, get dressed without thinking about the physical movements necessary to get the job done. I admit that was once the case for me.

However, at this stage in the game of my life, I now use a cane to assist me to put on my trousers. It’s an example of adapting to my abilities and it gets the job done.

Watching the show – I imagined having slacks, that, once on, would help my legs to bend and move. Basically, work whatever muscle strength I have to move with greater ease. I don’t want slacks that can make run marathons or scale tall buildings in a single bound,  just ones that would enable me to move around with more stability.

Let’s face it, now that we have self-driving vehicles the idea of self-walking shoes and trousers doesn’t sound that far-fetched.

I find it fascinating that another person, half-way across the globe who also has the scientific smarts – was inspired by the same cartoon series.

Jonathan Rossiter, a professor of robotics at the University of Bristol, has developed wearable technologies with artificial muscles. They have actually called them “The Right Trousers”.

Much like I imagined, the trousers aim to provide assistance for people with mobility challenges while also allowing them to use their muscles.

Wow – Could it be possible that my imagined desires were somehow transmitted to Mr. Rossiter?

There is no way of knowing of course, but it supports my belief that we are all connected and come from the same source of inspiration.

Here’s the article from the Guardian

Smart trousers with artificial muscles have the potential to improve the lives of people with mobility problems, say researchers.
Inspired by the Wallace and Gromit clay animation The Wrong Trousers, the garb has been dubbed “the right trousers”.

Jonathan Rossiter, a professor of robotics at the University of Bristol who is leading the project, demonstrated components of the trousers at the British Science Festival, taking place in Hull this week. He believes that wearable technologies will not only assist people with mobility problems with daily tasks, but could also be useful for rehabilitation.

“We have developed lightweight bubble artificial muscles, which could help people to stand up or to lift objects,” Rossiter said. He said a key advantage of these kinds of wearable technologies is that they provide assistance while allowing people to continue using their own muscles. “We certainly don’t want people to get weaker,” he said. “We want a balance between assistance and a rehabilitative device.

“The artificial muscles are not yet brain-controllable but rather work by measuring the muscle activity of the limbs.”

Other technologies being developed by the team include a wearable pad that can stimulate muscles through the skin and a thermosensitive knee brace. The knee brace, made of graphene, responds to changes in muscle temperature by becoming rigid when cooled and soft when warmed.

“With an ageing population, we want to be able to maintain people’s mobility for as long as possible,” he added. Wearable technologies like these will also benefit people rehabilitating from strokes.

The team are using information gathered during a focus group to design trousers that are practical and allow for easy dressing. They have even developed trousers that fall down with the press of a button, to make it easier for people to go to the lavatory.

The smart trousers are still in development, but Rossiter said many of the components, such as artificial muscles, are ready for testing on people. “We are all going to need smart clothing to help us be mobile for longer,” he said. “It is easy to see how these will become ubiquitous in the near future.”

Top Photo – Wallace and his dog Gromit in the film The Wrong Trousers. Photograph: Allstar

LWT 025 Christian McNeil – Being Her Best Self